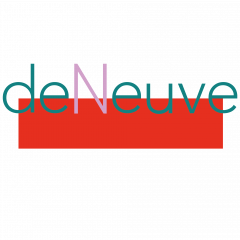 7. For the Young Man

I want to listen to this album

Listen to this album on Spotify

Buy this album on Blowpipe

More than forty years ago, the Amsterdam formation Tox Modell had one foot in the punk movement and the other in the emerging Ultra movement. Two guitarists from that band, Andre Bach and Mark Tegefoss, are still experimenting with music that is difficult to define. Under the name deNeuve, .be, named after the extension of their website, is their fourth release on Blowpipe. For the first time, the guitars are lowered in favor of electronics.

The opening track immediately sets the tone: uptempo and heavy. The vocals are reasonably easy to follow and the rhythmic claps make it all danceable. The fierce is everywhere on the record, often changing into hectic. Voices are mainly in the form of samples like in Double North, with a mysterious unintelligible female voice between the acid-like synthesizer sounds. The most striking song is Coast Starlight: after a Cabaret Voltaire-esque intro, a kind of fast electronic dub unfolds with cut-up samples and game sounds. Curious is Dressed Up, a totally unrecognizable remake of the Technoville song from 1983. With their punk and Ultra roots, deNeuve has found a unique contemporary sound, which is distantly reminiscent of EBM due to its heaviness, but still in a niche of contemporary music.